Energy Bulletin: Peaksters on the Potomac

"For five years the peak oil movement has been largely the province of internet conspiracy buffs, church basement conferences and esoteric debates among petroleum geologists and scientists about statistical data few can understand. Last month, however, oil “peaksters” seemed to break out of their policy doldrums when they journeyed to the banks of the Potomac for what may have been their first mainstream conference in the nation's capital.

Sponsorship by the University of Maryland gave peak oil at least momentary “street cred” on Pennsylvania Avenue as federal, state, and local politicians joined with business executives, bureaucrats, economists, and respected scientists. City council members from places like Huntington Beach, Calif., and Bloomington, Ind., joined Montana Gov. Brian Schweitzer, a Democrat, and such Washington stalwarts as Rep. Roscoe Bartlett (R-Md.). The Maryland Republican, an engineer who invented an oxygen recycling machine used by NASA in manned spacecraft, has founded the peak oil caucus in the House.

Department of Energy consultant Roger Bezdek, who directed research for the federal Energy Research and Development Administration during the 1970’s energy crisis, discussed his strategy for a crash program to develop alternatives to oil. Former World Bank economist Herman Daly, winner of the Sweden’s alternative Nobel Prize the Right Livelihood Award, and Lester Brown, founder of the Worldwatch Institute and its annual State of the World Report, were there. So was NASA Goddard Space Institute Director James Hansen, perhaps the leading scientist to document global warming, and Mona Sahlin, minister of Sustainable Development for Sweden, which is pursuing a plan to completely end its dependence on oil. This was no crowd of radical tree huggers.

For three days, they debated how the nation and world should respond to the imminent peak in world oil production, after which the supply of Beverly Hillbilly Jed Clampett’s “black gold” will decline forevermore while demand blows through the roof as the industrial and automotive age engulf China and India."

Here is where I got the idea, and it only cost me $2.42:
solarcooking.org 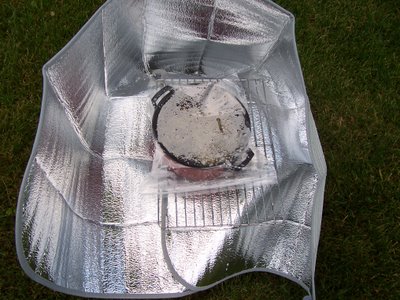 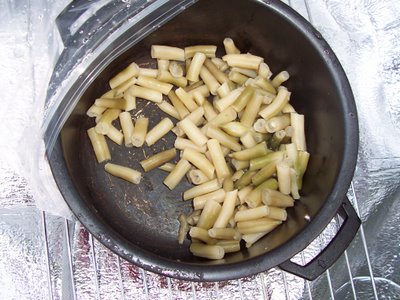 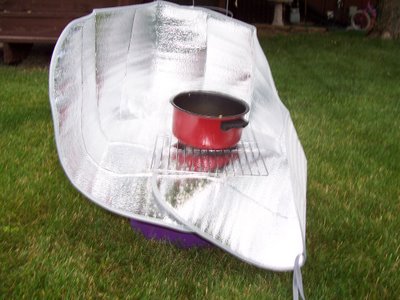 I put the solar cooker out in the sun today around 1pm between work and going to the anniversary celebration. It was mostly sunny and in the 80s. I had to hurry up and think of something to experimentally cook, and I also had to find a dark pot of some kind in a hurry before I left to go to the celebration. I found this small teflon-type red pot. It was small enough that I could place the pot into a large plastic bag as the instructions showed. As for the food item, I found some frozen green beans in the freezer so I threw them into the pot, put the pot in the plastic bag and set it out on the solar cooker. After that, I left for the party closer to 2pm.

5-6pm:
Arrived home. Checked on cooker and it was IN THE SHADE! But it did look like it had been heating up while I was gone. There were moisture beads on the walls of the plastic bag and the pot was warm but not hot. I went ahead and moved the whole solar cooker back into the sun and facing west to follow the remaining path of the sun....then I went inside and took a nap--big mistake but I rather enjoyed it!

8pm:
Woke up and went out and checked on cooker. It was no longer in the sun again and was cool. But it did look like it cooked--the beans were still warm. Actually, the beans looked whitened or blanched from the sun.

Conclusion:
--You need to be around to move the cooker as the sun moves. Leaving it and taking a nap was my mistake.
--The sides were a little "flappy" and curved inward at times. You have to keep adjusting it but it does heat up and work.
--Wind could be a major problem and you could lose your food if it tips over.

Overall, my impression is that this is not a real stable setup, and I think I'd rather try building a small wooden box-type of solar oven for more stability. I may have to move on next weekend and try that. It's supposed to rain here all through the week into next weekend so I probably won't have the opportunity to experiment much. This model I've tried is a very good alternative, though, if you have no other options. I believe it *will* work. Maybe I need to go and buy a $6 windshield reflector....
Posted by peaknik at 8:58 PM No comments:

The Lure of the 100-Mile Diet is gaining momentum.
Posted by peaknik at 6:19 PM No comments:

The party's over (graduation, that is) and I'm back to my usual PO musings. I've decided to do a little round-up of things people have posted this week on some of the PO forums I frequently visit. Besides the excellent comedy routine of Robert Newman (posted in the entry below) about the History of Oil, the major themes this week have included food, finances, freedom, and the "fall".

In the areas of finance and the economy, there have been several references to Greenspan's comments on peak oil at the Energy Bulletin, the International Herald Tribune, and the Monterey County Herald to name a few. Will this make peak oil go mainstream? Yahoo won't let me acces the article I saved about Russia switching a fraction of it reserves out of U.S. dollars. Then, someone is concerned about the Federal Reserves recent moves in an article at The Information Clearinghouse. Finally, one of my favorite financial geeks posted a link to Freedom to Facism in order to really make the hairs stand on end.

Another interesting theme evolving this week about exponential arithmetic and population included the World Clock and Bartlett's Laws Relating to Sustainability.

Which brings us to The Crash and has become a movie in its own right. Others have been willingly offering newbies websites like this one and a guidebook on how to weather the coming storm of oil depletion.

The remainder of the discussions were concerning how we're going to eat and rocketstoves. I've noted two new blogs from people in the forums such as Entire-of-itself and Green, Blue, Brown who also liked Newman's "History of Oil" clip, too! Michael Kaer, if you're reading this, I haven't forgotten your blog and links...I just don't have them handy at the moment. I will be placing these blogs in my roll when I get some time.

There were lots of other topics discussed, of course, but these were the ones I was interested in.

On the personal front, I ordered my internet friend, Richard Embleton's "Oilephant Down" lastnight. I should be getting it in a few days now.

The garden is so-so this year. We had torrential rains that delayed planting out the seedlings at the right time, and then the graduation took the rest of the time away. My garden is about half planted at the moment. However, I have plans to start a fall crop for the cool season veggies in August. I should have more time then. My elderberries are growing and my new peach tree has leaves!!!! My grape vine is in its third year and it is taking off! Even the rhubarb is ready and it's only in its second year. Horseradish is doing great, too, as are my Tom Thumb peas. All of the herbs are doing excellent.

The Farmer's Market just opened this weekend from 7a-noon on Saturdays. It was pouring down rain but I went anyway. Everyone was huddled underneath the only tent that was up. I bought swiss chard, spinach, broccoli, and lettuce. Tonight I had the broccoli cooked in butter and water with spaghetti, drained and then mixed with parmesan cheese at the suggestion of the farmer who sold it to me. It was really good!!

I've also been garage salin' this weekend looking for tools, bikes, preserving materials, etc. I bought a small axe, a large axe, and 4 grocery bags of canning jars. That was about all I could find. Someone was selling metal shelving (great for storage) but I got there too late and they were ALL sold! All 10 of them! The bikes for sale weren't much to look at. Most of them were too rusty and they wanted too much for them in their condition, I thought.

Would someone please tell these women that garage sales aren't supposed to be all clothes all the time!? When I walk up to the sales, many of them take me straight to the clothes. I tell them "I'm not looking for what you might think I'm looking for." Then they ask what. I say hand tools, canning equipment, bikes. They grimace because they can't help me. I don't look like a person who would be looking for these things. I look more like someone who would be looking for baby things or nicnacs or something of that nature, I guess. Maybe it's just because I'm a female, I don't know. Oh! I found a good wind-up alarm clock (an old Big Ben) for $1. I walked out of that sale looking like an axe murderer with a clock.

That's it. Anyone have any good recipes for Swiss chard or spinach?
Posted by peaknik at 8:06 PM No comments:

Many of you peak oil addicts have probably already seen this by now but I thought it was a good link to put up on the blog. Serious but funny review of geopolitics. It's approximately 45 minutes long and it's on video.google.com.

Robert Newman's History of Oil
Posted by peaknik at 9:20 PM No comments: