Although there are long-term answers like ethanol, what's needed is a crash conservation effort in the United States. This doesn't have to be command-and-control style. Moral suasion counts for a lot, and if the president suggested staying home with family every other Sunday or otherwise cutting back on unnecessary drives, he could please the family values crowd while also changing the psychology of the oil market by showing that the U.S. government is serious about easing any potential bottlenecks.

Similarly, he could finally get the government to tighten fuel-efficiency standards and encourage both Detroit and drivers to end decades of steadily increasing gas consumption. These kinds of steps would create a little headroom until new supplies do become available or threats like Iran's current leadership or the Iraqi insurgency fade.

It's been done it before. For all the cracks about Jimmy Carter in a cardigan and his malaise speech, America did reduce its use of oil following the price shocks of the 1970s, and laid the groundwork for low energy prices in the 1980s and 1990s. But it would require spending political capital, and offending traditional White House allies, and that's something this president doesn't seem to want to do.
Posted by peaknik at 8:32 PM No comments:

Everybody and their brother has probably already read this or has blogged about it but I thought it was an extremely important article to emphasize if you haven't read it already. It doesn't sound very good.
Posted by peaknik at 1:48 AM No comments:

click here for flash animated video
Posted by peaknik at 8:38 PM No comments:

Under Strains of Peak Oil and Gas,Ideology Stretches to the Limit

Hello all. I know. I'm slacking on my entries lately. My excuse? Found a new job and have been searching online for scholarships for my daughter to fill out to help ME (and her)with expenses. I know--some of you are saying she should worry about that herself. I can't change horses at this stage in the game. I've beat college into her head since she could walk. So, if I can help her get at least $1000 in scholarships to pay for books, she can spend the rest of the spring/summer saving her money, too.

I am now going to be a WIC supervisor. This will provide nutritional education and vouchers for the local Farmer's Market for them to use! I will be promoting sustainability!

Anyway, to the point. I post this article because it gives reference to someone I "know" (well, at least via e-mail in a yahoogroup). His name is Tom Wayburn and I have a link in my sidebar to his site. He is a very intelligent person who has been thinking about how an adequate political system might be established with peak oil in mind. He calls his idea of a more perfect sustainable political system "anarcho-communism". Obviously, Mr./Dr. Wayburn has written other articles for FTW of which I've missed. But it was nice to see his name "in lights" so-to-speak.

The article also mentions my other favorites like Chalmers and Nader, and gives reference to my favorite villian Perle. I've heard of Thomas Friedman before but I don't think I've read his work. There was an article in the local newspaper the other day where our local high school's career center principal mentioned how he was reading a book by Thomas Friedman, and how he could relate to what Friedman said in the book concerning what he needs to teach the students at the career center if they are to be successful. Ugh to this--if Friedman is positing right-sided economics.

My entries may be far and few inbetween or sporadic. I'm going through lots of changes this year just as the world is.....
Posted by peaknik at 9:00 PM No comments: 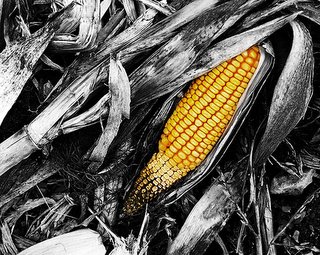 Tonight, I attended a hearing regarding a local ethanol plant that is to be built here in my county on the outskirts of town. The hearing was busting at the seams with people. It was standing room only. I couldn't figure out if the majority were for the building of the plant or against it. Several of the people were from out of town, from pipefitter unions and such. I don't understand why they would be interested. I don't even know who was in charge of the hearings. I'm guessing it was the state's environmental agency because the discussion was about emissions and the permit the plant would have regulating the percentage of emissions (if I understand this right).

This community is practically void of new, decent paying jobs and the community is almost willing to have anything come here. There are also those NIMBYs who are worried about possible problems with safety. These NIMBYs are already surrounded by an airport and the landfill.

I imagine the reason so many people attended the hearing was because there was this huge half-page ad in the paper with pictures of other ethanol plant explosions and the fires they have produced. It kind of got MY attention!

Most of you who are polished up on your alternative/renewable energy points already know the finer aspects of ethanol production. I really feel compelled to write another LTTE regarding these points. I don't know if I will or not. Maybe I'll wait and see what others write-in before I do. You know, I would like to refer people to the facts regarding exponential growth and present consumption rates. In other words, whether we will need to choose between eating or driving because more and more arable land will be needed for the production of ethanol. I just have these gastly images in my mind 20 years from now when I think I'll see acres and acres of cornfields around me but unable to eat it, and I'll be starving all because it's being used for ethanol production!!!

Somebody at the meeting brought up that the ethanol plant would bring other businesses here including dry ice plants and dairy farmers???? How would this be? Why would a dairy farmer come here because of an ethanol plant? I envision the dairy farmer not being able to buy any land around here because it will all be used up for corn--->ethanol production!

Ah, well. I guess it's better than a nuclear plant in my backyard. People just don't seem to "get it" though. Everybody doesn't understand that no combination of anything will replace or cater to our present way of living and exponentially growing consumption rates like oil has. I guess I should be happy that people are willing to wean themselves off of oil. That's a step forward, at least.

ON EDIT: I found some interesting discussion about ethanol on The Oil Drum. I'm going to print a copy of the discussion, copy it off, and then send it to my mayor, the councils, and my opinion page editor of whom I know.
Posted by peaknik at 10:09 PM No comments:

Walgreens to harness power of the sun

I've been boycotting Walmart and going to Walgreens. Walgreens DOES give more money to the Republican party but, hey, I have to weigh the evils somehow. I try to buy from local places as much as possible but there just isn't anywhere I can buy a locally-made iron or some laundry soap around here, for instance. So, anyway, I'm happy to see Walgreens doing something in an energy-conscious fashion. I think it would be so neat to see them do that at MY store but things like this are never done in small little towns like mine. Here's part of the article:

Solar roof tiles will enable each facility to generate between 20% and 50% of its own electricity on site. The stores will host solar electric systems that will replace energy equivalent to more than 22 million gallons of gas and avoid hundreds of tons of carbon dioxide emissions comparable to growing more than 5 million tree seedlings.

The new systems will generate more than 13.8 million kilowatt-hours per year, making this the largest solar project ever completed in the United States. The first systems are expected to be operational in early 2006.

"Climate change, air pollution, and depletion of natural resources are some of the most significant environmental problems facing the world today," said Tom Bergseth, divisional vice president of facilities, planning and design for Walgreens. "We're excited about implementing this progressive approach toward using clean, renewable energy to benefit the communities we serve."

Posted by peaknik at 9:55 PM No comments:

Sorry but the hard drive on my laptop had burned up almost literally! I had to purchase another hard drive--so everything I had on the old one is gone now. Oh well. Purchased a cooler to place under the laptop for this new one.

Now my main objective is to try and build Fort Knox-like anti-spyware into my computer. It's getting really bad. I suppose it's the Yahoogroups I read and all the surfing I do when I click on people's links. On my other computer, I have this terrible one called Virtumonde or something like that. I can't seem to get rid of it. I delete it every day at least once. It or another type of spyware/hijacker takes control of my browser and redirects it. I can't even search for anything on Google without it redirecting to what looks like the Lycos search engine, then it sometimes goes to sites not to my liking, if you know what I mean. Brother!

I just went to Lavasoft and downloaded some anti-spyware including Spybot S&D, AdAware SE Personal, and Counter Spy. I tried XoftSpy but it requires purchasing it after identifying spyware from a free scan. I'm half afraid to purchase anything online like that for fear it's a counterfeit site!

I went from IE to Mozilla Firefox as a browser after others' suggestions. Any other suggestions?
Posted by peaknik at 9:24 PM No comments:

Hi all. Just wanted to let everyone know that my laptop crashed and I can only get online periodically. Laptop is in the shop and hopefully can be fixed after Friday, then it's work Saturday and Sunday. Please enjoy all of the links on my sidebar until then! Happy New Year to all!
Posted by peaknik at 9:44 AM No comments:

...Another expert witness at the Peak Oil hearing was Robert Esser, director of Global Oil and Gas Resources, a private research and consulting firm that provides continuing assessment of future oil supplies.

In a text of his remarks, he warned that the planet is consuming 30 billion barrels of oil a year of its finite resources.

"It is true that total annual global production has not been replaced by exploration success in recent years," he testified, but noted that exploration together with production upgrades more than compensated for oil produced during the eight years from 1995-2003.

"We still do not have an exact estimate of total reserves," he said, which makes it hard to accurately time Peak Oil. "Rather than an imminent peak, we see an undulating plateau, two to four decades away."

"A global problem has to be dealt with by a global approach, whether it's 5, 10, 15 years in the future, or already upon us," said Udall. "I see the issue as being one of political will. I don't know that we have the will today to tackle this."
Posted by peaknik at 4:44 PM No comments: